We ask you to pray for San and Yom. They have been married for about 3 months. They are both Cham and come from a village about and hour and a half from Phnom Penh. They both desire to be faithful followers of the Lord Jesus Christ. Yom’s parents were very opposed to her conversion to Christianity but they could not stop her. They actually thought she was only following her husband. They could not fathom that she would abandon Islam to follow the “crazy foreigner’s religion.” They were wrong. Since her salvation Yom has been growing as a Christian and has been forced to make some very difficult decisions. Her parents continually put pressure on her to compromise her new convictions but she refuses. God has truly been merciful to this young couple. Monday morning (Sunday evening in the U.S.A.) San and Yom are returning to the village to meet with Yom’s parents. They are going to speak very frankly with them in regard to their desire to follow God with their entire lives. San intends to ask their permission to move Yom out of her parents house and have their own house that is led by the Word of God. (When couples get married here in Cambodia they nearly always live with the brides parents. There are several cultural reasons for this custom but, in many cases, it boils down to the fact that the brides parents don’t want to loose their daughter. Instead they gain the “free” or “cheap” labor of a son-in-law.) San approached me last week to tell me that he intended to meet with his in-laws and tell them that be needs to be able to lead his wife according to their Biblical convictions and he feels he can best do that if they are living on their own. Additionally, he intends to tell them that he and Yom are praying about their future. San believes that God may be calling him to full-time Christian service. This meeting with his in-laws will be a good test for him. Please pray that San will have a humble spirit and that he will represent Christ well as they go to meet with Yom’s parents. This meeting could actually be used by the Lord to help win Yom’s parents to the Lord. On the other hand it could cause some serious problems for San and Yom. We are encouraged to see this young couple desiring to fully surrender to the Lord.

We began a 5 week promotion this morning. It is a competition to see how many Jr. High young people between the ages of 12-14 we can get to come to the Sunday morning and evening services. This is a competition between our three Children’s ministry teams. We were blessed to have 16 Jr. Highers in the morning service. Several returned this evening as well. This is the first time that we have been able to focus on this age group. It is our goal to see these young people gravitate away from the Sunday afternoon Children’s ministry and into the mainstream services of the church. Once the competition is over we are planning to start a Jr. High girls and boys Sunday school class. It is our goal to be averaging 20 every Sunday morning in the Jr. High department by the end of this 5 week competition. 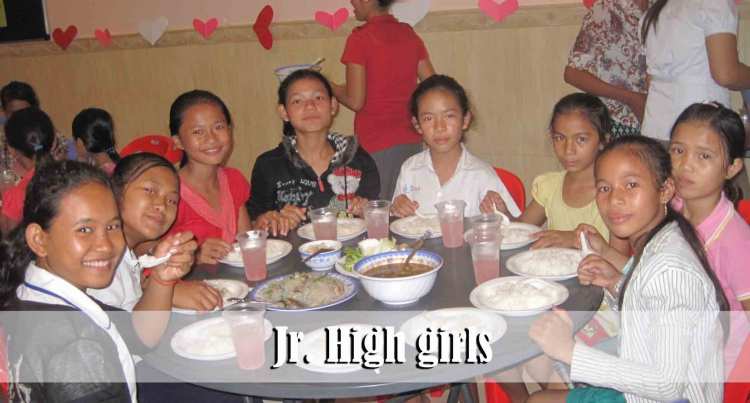 It was a blessing to have Miss Samantha Thaing arrive this past week from our home church in Long Beach, California. Samantha graduated from Bible College and has been faithfully serving there in Long Beach for several years. She will be here for a minimum of one year and perhaps longer. She has a decent handle on conversational Khmer but will be enrolling in Khmer class very soon. I think the most difficult adjustment that she has had to make so far is the cold showers! Please pray that Samantha will play a significant role in reaching young ladies.

We are presently in the middle of an important series of Sunday evening messages that I have entitled “Seven Principles to Guide the Believer.” The majority of our people are new believers and they are daily faced with making difficult decisions. These principles apply to believers no matter what culture one is from or time period in which they live. It is encouraging to see how open our church is to learning these principles and trying to follow them in their lives. Here is a sampling of the questions that we have been asked in the past few days: 1) My boss at work sends me to the store every morning to purchase fruit to be used in his daily Buddhist sacrifices. It is wrong for me to buy the fruit for him since I know he is going to offer it to the spirits? 2) What if I eat food that has been offered to idols? 3) My husband is not saved. He is the village leader and he is demanding that I accompany him to the Mosque when he offers sacrifices. What am I supposed to do? 4) My parents force me to go to the Buddhist temple. I know that it does not honor God. What am I supposed to do? 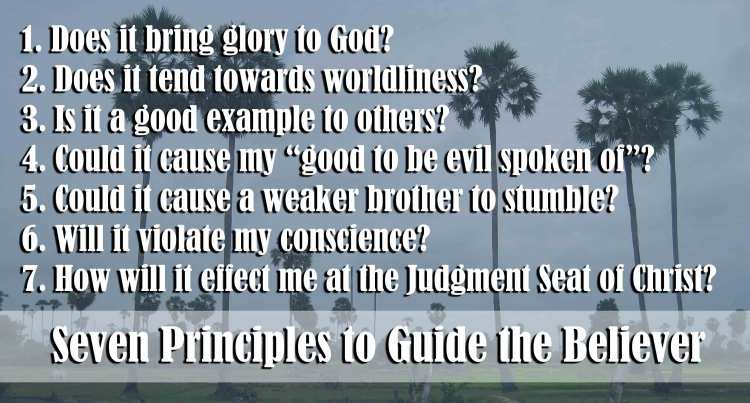 Our attendance was a bit down today in the children’s ministry due to the fact that today is a Chinese Buddhist religious day. In fact we were missing about 50 children who are normally here. Apparently many of these children stayed home to eat all of the food that their parents had prepared for the festival. All together we had around 225 folks in the ministries of Pacific Baptist Church of Phnom Penh this weekend. We praise the Lord for that and ask you to keep praying for those who are taking a stand for the Lord.

Because of God’s grace,